Laboratory for quantum simulators and sensors

Strontium atomic clock is the most accurate clock of our time which sets new world records for both precision and stability – key metrics for the performance of a clock. It won’t lose or gain one second in some 15 billion years. Strontium clocks are state-of the art devices, which today still can be found in only a few research centers across the Europe.

Building the optical strontium clock in CALT may have long-term impacts that go well beyond the CALT project. The most precise optical clocks cannot be readily transported. Today, the stabilities of current satellite based dissemination techniques using global satellite navigation systems (such as GPS, GLONASS) or two ways satellite time and frequency transfer reach an uncertainty level of 10-15. While this is sufficient for the comparison of most microwave clock systems, the exploitation of the full potential of optical clocks requires more advanced techniques. Hence, in order to link the increasing number of world-wide precision laboratories engaged in state-of-the-art optical frequency standards, a suitable infrastructure of optical fibers is of crucial importance. “Fiberization” of Western Europe for optical clock comparison is already happening, and we expect that this process will soon begin also in the South Eastern Europe. This would in the long-term scale enable to establish South Eastern European Optical Fiber Network for Frequency Metrology with CALT as a reference center from which strontium optical frequency standard is transferred to the other relevant institutions in the region. 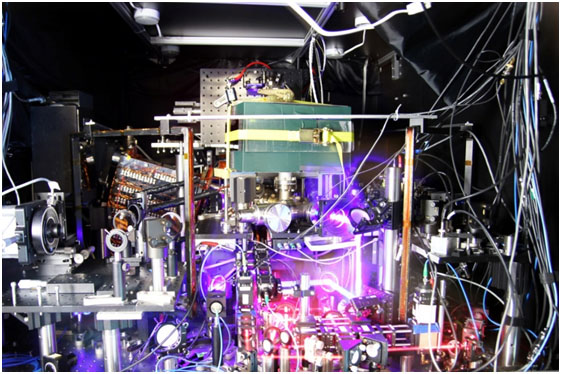 Quantum sensors and simulators research will be devoted to the investigation of quantum degenerate strontium systems, which (depending on strontium isotope) can lead to Bose-Einstein condensates (BEC) or degenerate Fermi mixtures, and will enable the simulation of strongly correlated many body systems, i.e. the atomic clock will be used as a quantum simulator.