The semiconductor industry has continued demands for denser and denser electronic circuit packing. The classic “193 nm immersed” photolithography using ArF lasers has reached its limit (spatial resolution of 50 nm). In response, the new generation of photolithography – EUV photolithography has emerged. It is based on laser-produced plasma as a light source in the EUV/XUV area, allowing the resolution below 22 nm. The development of such light sources is strongly increasing, however still limited by the low intensity of the EUV/XUV light and the production of a reflective optics needed for printing the electric circuits.

The development of attosecond (1 as = 10-18 s) physics allows for an insight into the world of ultra-fast processes in nature that are out of reach to other techniques. Its development is closely related to the development of higher harmonics generation of light by the interaction of femtosecond (1 fs = 10-15 s) laser with neutral noble gases (Ar, He), where the electrons are released from an atom by electric field, accelerated and collided again with the atom, emitting higher harmonics of the laser light. The limitations of thus generated pulses (low intensity and the low boundary of the wavelength) can potentially be overcome by using low-ionized laser-produced plasma instead of precious gases. 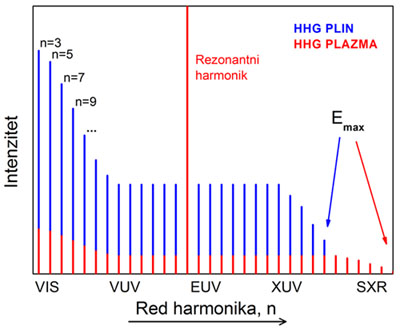